The Insolvency Service’s 2016 Review of IP Regulation always makes for interesting reading. This year, the headlines include:

The report can be found at https://goo.gl/Jkwz19.

The Review reveals another drop in the number of appointment-taking IPs. In fact, there was the same number on 1 January 2017 as there was on the same day in 2009: 1,303.

Is it a surprise that the number of appointment-taking IPs has dropped again? The 2016 insolvency statistics show modest increases in the numbers of CVLs and IVAs compared with 2015 and of course there was a bumper crop of MVLs in early 2016. Why is it that fewer IPs seem to be responsible for more cases?

My hunch is that the complexity of cases in general is decreasing and I suspect that the additional hurdles put in place as regards fees have encouraged IPs to look at efficiencies, to create slicker processes, and to be more risk-averse, less inclined to go out on a limb with the result that some cases are despatched more swiftly and require less IP input.

I also suspect the IP number for next January will show another drop. The expense and effort to adapt to the 2016 Rules will make some think again, won’t it?

Does the presence of the regulators breathing down one’s neck erode IPs’ keenness to remain in the profession? How worried should IPs be about the risk of a regulatory sanction?

Regulatory actions on the increase

The RPBs seem to have shown varying degrees of enthusiasm when it comes to taking regulatory action. 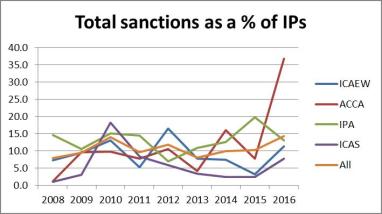 To me, this hints at regulatory scrutiny of a different kind. Is it coincidental that the ACCA issued proportionately far more sanctions than any other RPB last year? Could the Insolvency Service’s repeated monitoring visits to the ACCA over 2015 and 2016 have had anything to do with this spike?

What are behind these sanctions? Are they generated from the RPBs’ monitoring visits or from complaints?

Last year, I observed that for the first time RPBs’ investigations into complaints had generated more sanctions than their monitoring visits. Regulatory actions in 2016 returned to a more typical pattern. 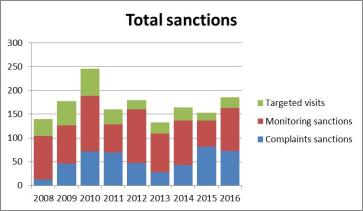 Does this reflect a shifting RPB behaviour or is it more a result of the number of complaints received and/or the number of monitoring visits undertaken?

Well, no wonder there were fewer disciplinary actions on the back of complaints: the RPBs received 28% fewer complaints in 2016 than they did in 2015.

Why is this? Is it because fewer complaints were made? Undoubtedly, IVAs have generated a flood of complaints in recent years not least because of the issues surrounding ownership of PPI claims, but those issues were still live in 2016, weren’t they?

Perhaps we can explore this by looking at the complaint profile by case type:

Yes, it looks like IVAs continued to be contentious last year, although perhaps the worst is over. It seems, however, that the most significant drop has been felt in complaints relating to bankruptcies and liquidations. The reduction in bankruptcy complaints is understandable, as the numbers of bankruptcies have dropped enormously over the past few years, but liquidation numbers have kept reasonably steady, so I am not sure what is going on there.

But are fewer people really complaining or is there something else behind these figures?

When the Complaints Gateway was set up in 2014, it was acknowledged that the Insolvency Service would ensure that complaints met some simple criteria before they were referred to the RPBs. There must be an indication of a breach of legislation, SIP or the Code of Ethics and the allegations should be capable of being supported with evidence. Where this is not immediately apparent, the Service seeks additional information from the complainant.

The graphs above are based on the complaints referred to the RPBs, so what is the picture as regards complaints received before the sifting process occurs?

The Insolvency Service’s review explains that in 2016 a new criterion was added: “Complainants are now required in the vast majority of cases to have raised the matter of concern with the insolvency practitioner in the first instance before the complaint will be considered by the Gateway”. This is a welcome development, but it did not affect the numbers much: it resulted in only 13 complaints being turned away for this reason.

But this rejected pile is not the whole story. The graph also demonstrates that a significant number of complaints – 144 (17%) – were neither rejected nor referred last year, which is a much larger proportion than previous years.   Presumably these complaints are being held pending further exchanges between the Service and the complainant. Personally, I am comforted by this demonstration of the Service’s diligence in managing the Gateway, but I hope that this does not hint at a system that is beginning to get snarled up.

How many complaints led to sanctions?

When I looked at the Insolvency Service’s review last year, I noted that the IPA’s sanctions record appeared out of kilter to the other RPBs. It is interesting to note that 2016 appears to have been a more “normal” year for the IPA, but instead the ACCA seems to have had an exceptional year. As mentioned above, I wonder if the Insolvency Service’s focus on the ACCA has had anything to do with this unusual activity (I appreciate that 2010 was another exceptional year… and I wonder if the fact that 2010 was the year that the Insolvency Service got heavy with its SIP16-reviewing exercise had anything to do with that particular flurry).

The obvious conclusion to draw from this graph might be that an ACCA-licensed IP has a 1 in 3 chance that any complaint will result in a sanction. However, perhaps these IPs can rest a little easier, given that the ACCA’s complaints-handling is now being dealt with by the IPA.

What about sanctions arising from monitoring visits? How do the RPBs compare on that front?

All but one RPB reported an increase in monitoring sanctions 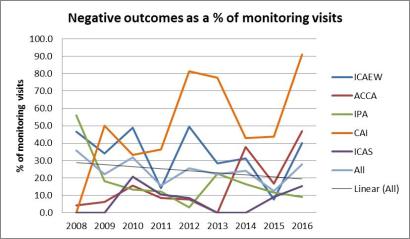 Nevertheless, it is interesting to note that almost all RPBs recorded increases in the number of negative outcomes from monitoring visits over the previous year. I am not sure why the IPA seems to have bucked the trend. It will be interesting to see how the populations of ACCA and IPA-licensed IPs fare this year, as they are now being monitored and judged by the same teams and Committees.

How frequently are visits being undertaken?

The Principles for Monitoring, which forms part of a memorandum of understanding (“MoU”) between the Insolvency Service and the RPBs, state that the period between monitoring visits “is not expected to significantly exceed three years but may, where satisfactory risk assessment measures are employed, extend to a period not exceeding six years”. However, most if not all the RPBs publicise that their monitoring programmes are generally on a 3-yearly cycle.

The following graph shows that the RPBs are not quite meeting this timescale:

If we look at each RPB’s visits for the past 3 years as a percentage of their appointment-taking licence-holders, how far off the 100% mark were they..?

ICAEW’s missing of the mark is not surprising, given that they publicise that their IPs in the larger practices are on 6-year cycles. At the other end of the spectrum is the ACCA, which managed to visit all their IPs over the past 3 years and then some. However, as we know, the ACCA has relinquished its monitoring function to the IPA, so it seems unlikely that this will continue.

What is the future for monitoring visits?

The Insolvency Service’s 2015 review hinted that the days of the MoU may have been numbered. Their 2016 review strengthens this message:

“We propose to withdraw the MoU as soon as is reasonably feasible, subject to working through some final details”.

The review goes on to explain that the Service will be adding to their existing guidance (https://goo.gl/wDHElg). As it currently stands, prescriptive requirements such as the frequency of monitoring visits is conspicuously absent from this guidance. Instead, it is largely outcomes-based and reflects the Regulator’s Code to which the Insolvency Service itself is subject and that emphasises the targeting of monitoring resources where they should be most effective at addressing priority risks. The Service itself seems to be lightening up on its own monitoring visits: the review states that, having completed their round of full monitoring visits to the RPBs, they are now moving towards a number of risk based themed reviews. If this approach filters through to the RPBs’ monitoring visits, will we see a removal of the 3-yearly standard cycle?

Current priorities for the regulators

Does the 2016 review reveal any priorities for this year?

Not unsurprisingly, given one particularly high profile failure, IVAs feature heavily. The review refers to “general concerns around the volume IVA business model and developments in practice” and continues:

“The Insolvency Service is working with the profession to tackle some of these concerns; for example, through changes to guidance on monitoring and protections for client funds, and also a review of insurance arrangements. We are also engaging with stakeholder groups to better understand their concerns and how these may be tackled. We expect that this will be a key focus of our work for the coming year.”

Other projects mentioned in the review include: